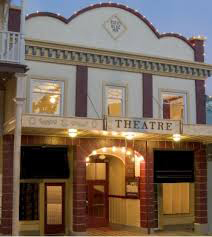 SOLD OUT One of These Nights – The Songs of the Eagles

Traveling Wilburys Revue – A tribute to the greatest band that never played live! 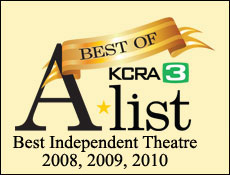 About The Sutter Creek Theatre

The Sutter Creek Theatre professionally presents contemporary and traditional music, theatrical works, dance, film, and other artistic events that are engaging to a diverse regional audience. 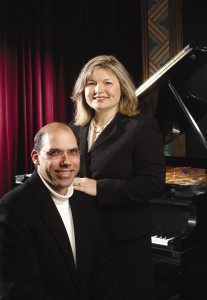 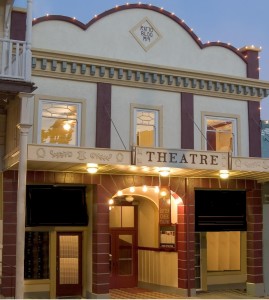 A former silent film theatre, the venue comfortably seats 215 people. Because it was designed for viewing film, all of the seats have views of the stage. The original art deco ceiling designs are intact, and were the basis of our logo. We have a balcony, and the original theatre seats (complete with hat racks underneath!) The theatre is renowned for its excellent acoustics and intimate seating. To traveling artists and theater groups we offer sound engineering and lighting support. We offer beer and wine, and other beverages and snacks. The theatre building is also home to Heart & Soul, AT 42 Main, offering unique home decor, jewelry, chalk paint and more. The theatre building also houses the tasting room for Uphill Vineyars, at 46 Main, where you can buy tickets to Sutter Creek Theatre shows, Friday – Sunday noon – 6pm and you can sample their excellent wines and buy a bottle or a case. 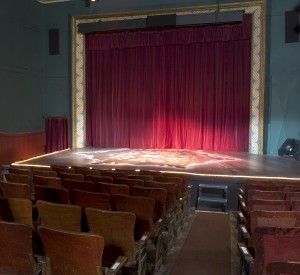 Located in the heart of the Mother Lode, the Sutter Creek Theatre has survived a tumultuous history. Its wooden predecessors rose repeatedly out of the ashes of the town’s early-day fires. In the 1860s a saloon and billiard parlor was located on the site. But repeated fires in 1862, 1865, 1868 and 1888 destroyed it and any other wooden shops there. By 1912 the site held a saloon, barber shop, and bocce ball court.

Around 1912 John F. Ratto, a Sutter Creek merchant (who was also the county’s Hupmobile dealer), opened a silent-movie house in the 1850s vintage brick building now known as the Bellotti Inn across the street from the site of the soon to be built Sutter Creek Theatre.

Ratto signed a lease for the SCT site and began construction of a two-story brick theatre. Sutter Creek has a strong Italian influence, and architect S.F. Dal Proto built the theatre with the traditional arches and stonework found in many Italian buildings of the 18th century.

By the end of the year, the (then) 250-seat theatre was practically complete, but the deadly Spanish Influenza epidemic of 1919 had closed down all of Sutter Creek’s public buildings, delaying the Theatre’s grand opening. While the records have been lost, rumor has it that the Theatre opened its doors on Wednesday, March 5, 1920, playing D. W. Griffiths’ Hearts of the World, starring Lillian Gish. 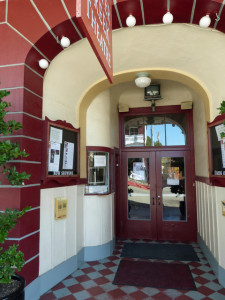 For two decades the SCT thrived. The owners lived in the large two-story, three-bedroom apartment above the Theatre lobby, and Mrs. Ratto played the piano and organ to accompany the silent movies. By the early 1930’s talkies had replaced the silent films, and for another two decades the Theatre thrived. But in 1952 the Theatre closed, playing Walt Disney’s “Bambi” as its last feature.The SCT underwent its first renovation in the 1970s. Sometime later several rows of seats on the lower floor were removed to install a stage. The SCT underwent a second, and major, renovation from 2000-2003 and the current owners continue to upgrade and restore the facilities. Patrons and artists benefit from modern sound, lighting, heating and air conditioning, and other physical improvements. Restoration of the original seating with new upholstery is continuing.

A total of four “Ratto” theaters were built in Amador County. Information was lost on the exact location of the theater in Plymouth. The theater in Ione was torn down to make way for a parking lot in the 70s, and fire destroyed the Ratto Theater building in Jackson on October 14, 1998. The SCT is the only remaining original former silent-movie house in the region.