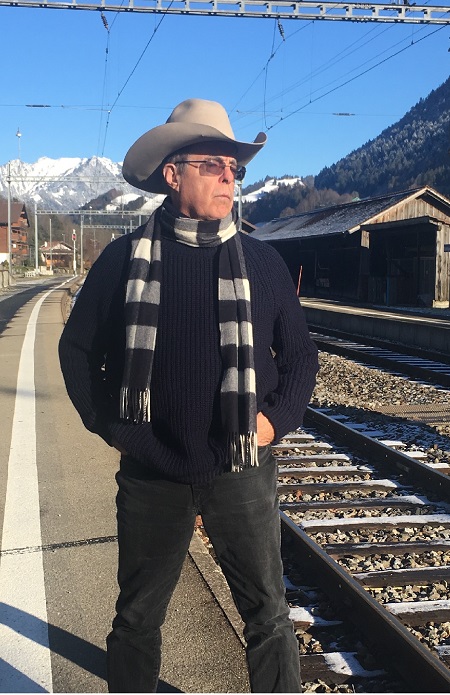 Singer-songwriter, painter, and essayist Tom Russell has released 35 highly-acclaimed albums and published six books, including a book on his art, a book of his songs, and a five-star rated book of essays, Ceremonies of the Horsemen. Russell was awarded the 2015 ASCAP Deems Taylor Award for excellence in music journalism, and his paintings reside in several major American museums and are represented through six world galleries.Russell’s latest recording of original compositions, October in the Railroad Earth, was released March15, 2019, on Frontera Records in North America and CD/LP on Proper Records everywhere else.

Russell describes the songs and sound as “Jack Kerouac meets Johnny Cash in Bakersfield.” Bill Kirchen is featured on lead electric guitar, Eliza Gilkyson adds vocals, and the Grammy® Award-winning Texmanicas appear on “Isador Gonzalez” about a Me x ic a n cowboy who died in England during a perormance of Buffalo Bill’s Wild West Show. The record contains nine other originals, including the title song from the Irish film Small Engine Repair, and a cover of the traditional “Wreck of the Old 97.”

October in the Railroad Earth follows the acclaimed 2017 Frontera/Proper album “Folk Hotel” and Russell’s tribute to Ian & Sylvia on True North Records, “Play One More,” both receiving worldwide acclaim. Between major releases in 2018, Russell recorded the Bruce Springsteen track “Across The Border” for the three-disc Appleseed Records anniversary sampler, Roots and Branches, and issued a re-recording of early classics on Frontera, Old Songs Yet To Sing.

Russell’s previous album of new original material was the 2015 “folk opera” that Thom Jurek of allmusic.com hailed as Tom’s masterpiece, “The Rose of Roscrae.” Named “the top folk album of 2015” by Mojo magazine, Roscrae was also lauded as “maybe the most important Americana record of all time” by UK Folk. The album was included in top ten lists of dozens of publications, including the Los Angeles Times.

REVIEWS OF THE NEW ALBUM
Folk Radio (Feb 26 2019) review: “Rolling Stone once declared Russell to be “the greatest living folk-country songwriter”. This album offers no reason to disagree.”

Alan Cackett (Feb 2019) 5 star review: “A work of art created by an underrated genius, a record that deserves to walk away with several Grammys in 2020 and should be forced listening for all the Nashville music executives, still stumbling around in the dark looking for the next big thing.”

A couple of new ones from the new album and a couple from his last two albums: