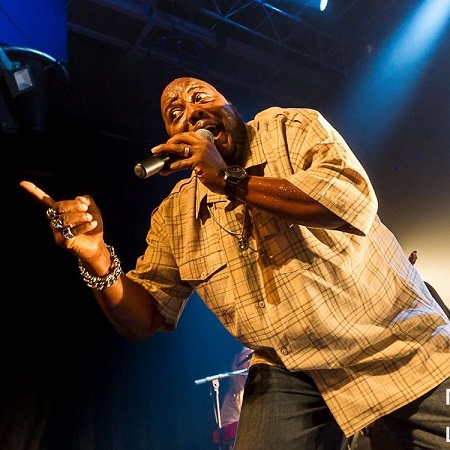 “Sugaray” Rayford is an American Soul blues singer and songwriter. He has released Six albums to date and was nominated for two Blues Music Awards in 2019 – Soul Blues Male Artist and B.B. King Entertainer of the Year. HE WON SOUL BLUES MALE ARTIST OF THE YEAR! His last album is nominated for a 2019 Grammy.

When Sugaray belts out a song, you not only hear it, you feel it. The excitement in the room is palpable when he takes the stage; he is a superb vocalist and entertainer. His dynamic voice is large just like the man. With his old school vocal style, echoes of Muddy Waters, Otis Redding and Teddy Pendergrass can be heard. At 6’5” he is a big man, but he moves with grace and energy. His fluid dance steps will remind you of the Legendary James Brown.

Texas born Caron “Sugaray” Rayford began his musical career at the age of 7 singing & playing drums in church, and his gospel influence can be heard and felt in his music. Rayford’s phrasing is intimate and conversational and the soulful gravel in his voice hints at his firsthand experience with hardship.

Beginning about 15 years ago in the San Diego area, he sang lead vocals with a R&B/Funk band called Urban Gypsys. With this band he had the privilege of sharing the stage with many notable artists such as The Average White Band, Dennis Quaid, Joe Luis Walker, Kal David, Super Diamond & Venice, to name a few.

Sugaray formed his own band in 2010, and it includes keyboards, trumpet, and sax.