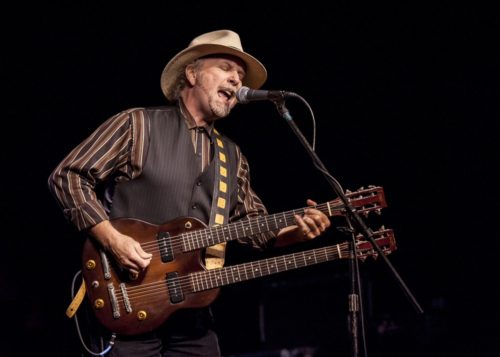 Roy Rogers is considered one of the world’s premier slide guitarists performing today. With 8 Grammy nominations to his credit, he is an internationally acclaimed musician and producer having produced John Lee Hook and Ramblin’ Jack Elliot. His previous collaborative efforts include work with Norton Buffalo, Shana Morrison, and Ran Manzarek. Most notably, “Translucent Blues” recorded with Manzarek, reached #1 on the Americana Roots Charts in 2012 and debuted on Billboard’s Blues Chart at #6.

As a product of the San Francisco music scene, Rogers’ roots are firmly planted in the blues. Artists with whom he has performed include Bonnie Raitt, Steve Mill, and Sammy Hagar among many others. He is well known for his riveting performances with his band, the Delta Rhythm Kings, consistently stretching the boundaries of his slide guitar.

“Roy Rogers means the modern master in the art of slide guitar…His versatility with the technique is nothing short of astonishing.” ~ All Music Guide