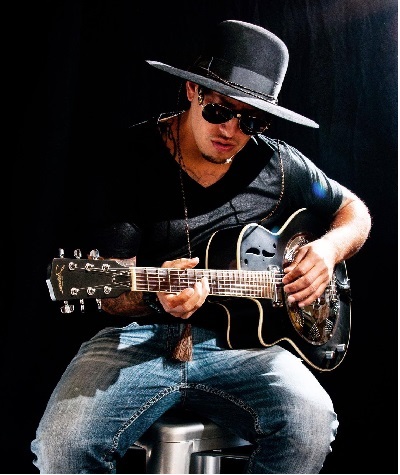 San Jose local Maxx Cabello Jr. is known for his guitar chops, his soulful voice and for mixing it up with a wide range of styles. He plays everything from slow soul jams, blazing electric blues and Latin rock. He grew up surrounded by music and he has photos to prove it. Images of a toddler sleeping in his father’s guitar case show he was destined to be a musician.

“Dad plays folk-Spanish music,” Cabello said. “When him and my mom sing, it will make you cry. It’s that kind of deep, real traditional Spanish music. I grew up listening to nothing but Mexican music (with) singing in Spanish.” But his corazon led him to the blues. “That’s really what I love about the blues,” he said. “There’s no right or wrong way to do it. It’s in the delivery. If the people can feel it, then you are doing it right. It’s not like I sit there with music charts and stuff. I play from my heart.”

Maxx has opened for Earth, Wind, and Fire, John Lee Hooker, Booker T & the MGs, Blood, Sweat, and Tears, Los Lobos, and many others. Among his inspirations are Jimi Hendrix and Carlos Santana, but his hard driving energetic method of playing is accomplished and completely his own.

Check all these videos out, they show a wide variety of styles of music.