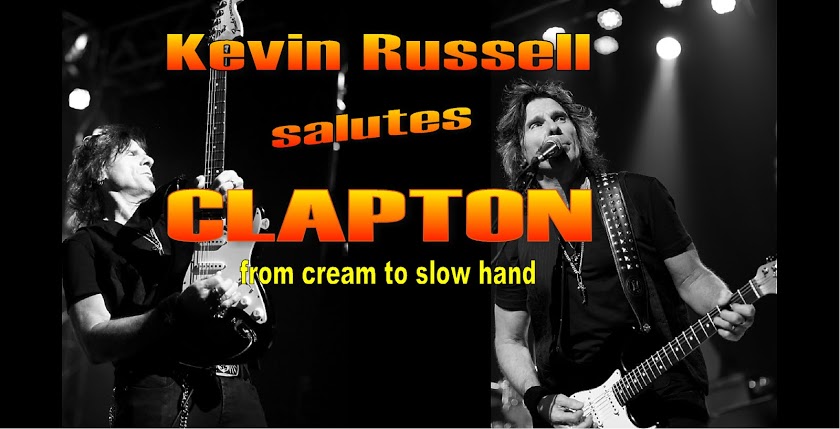 Kevin Russell guitarist /singer extraordinaire plays EC’s great songbook. From Cream to Slow Hand
Kevin is spellbinding as he brings to life these wonderful songs with his all star band!

World-class guitarist/vocalist/producer Kevin Russell honors one of the greats in Rock and Blues history with his Salutes Clapton tribute. Kevin and his band dig deep into the music of the British guitar legend with fire, passion, and precision.
Kevin Russell was born and raised in the Motor City and has a very unique blend blues, rock and soul. Kevin says: “It’s a Motor City thing!” Kevin is a very soulful guitar player as well as singer/songwriter and record producer. Kevin first rose to prominence with his classic rock band 707. Scoring a couple of rock radio classics hits and toured playing arena in the 80’s. Kevin has also played with a who’s who list of recording and touring artists throughout his career. Herecently finished over 380 shows in the cast of the Broadway Smash Hit Show “Jersey Boys” in NYC & SF. Kevin’s 707 smash rock hit “I Could Be Good For You” featured in the block buster film “Grown Ups” starring Adam Sandler.

Matt Pinder is a native of Northern California. Having grown up in a musically rich household during his formative years being the son of Mike Pinder of The Moody Blues .Matt picked up the bass at a very young age. Learning to play different styles came fairly natural to Matt. Also Matt is a wonderfully talented player and has great stage presence as well as a strong command of his instrument.

Steve Brown is widely known and recognized throughout the rock drumming scene as a sonic powerhouse!!Steve has worked with many name artists, that includes his stellar work with Ronnie Montrose.