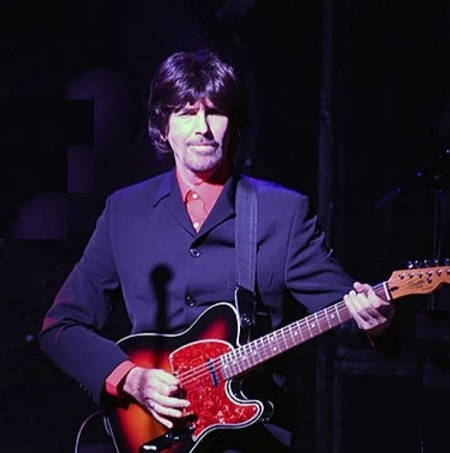 Nick Bold’s “George!” is a spirited performance that is as close to what it was like to be at an actual George Harrison concert as you could ever imagine.

With “George!” Bold is taking his passion for the quiet Beatle to a new level. The two hour plus performance is a tour de force that brings audiences to their feet with joy as Bold embodies the essence of Harrison with his virtuoso guitar playing and spot-on vocals. It’s all there, George’s biggest Beatles hits and all of his wonderful post-breakup solo material, including music from his 1980’s supergroup, The Traveling Wilburys.

Manchester’s Nick Bold made his first mark on the music business in the 1980’s as founding member, lead guitarist and principal songwriter for the British rock band, Virginia Wolf. Signed to Atlantic Records at the urging of Genesis/Phil Collins Manager, Tony Smith. The band’s membership included drummer Jason Bonham, son of Led Zeppelin’s John “Bonzo” Bonham. Following the release of their Roger Taylor (Queen)
produced self-titled debut album, Virginia Wolf were tabbed to be the opening act for The Firm (Jimmy Page/Paul Rogers) on their 1986 US Tour.

In 1988, after touring for over a year to support their Kevin Elson (Journey) produced second album, “Push,” the band decided to split amicably so that the members could pursue their own separate interests. For Bold, that meant so ngwriting and producing other artists. To date, he has written hundreds of songs including the hit ballad “Man In The Moon” which has been covered by numerous artists of all genres. In addition, his band Nick Bold & The Raging Sea perform constantly in the UK and have released two albums of all original, blues influenced, melodic rock and roll.

Taking a cue from his childhood, when he was constantly being told he looked like George Harrison, Bold appeared on the British TV hit “Stars in Their Eyes” as George. His impeccable impression immediately earned him critical acclaim and led to his performing all over the world in multiple Beatles tributes before becoming a founding member of the US based touring production, The Reunion Beatles.