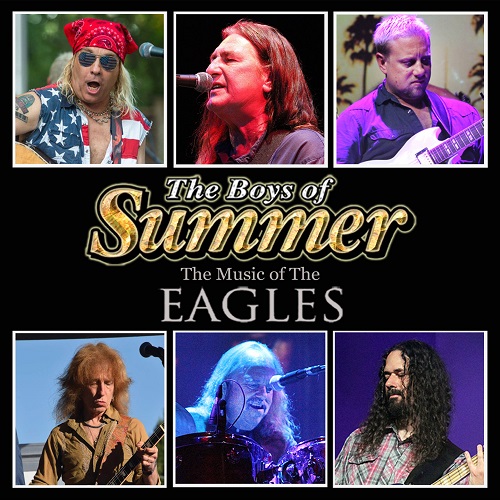 These guys authentically re-create the sounds and harmonies from country tinged ballads to hard rocking hits with flawless craftmanship. The Boys of Summer make their home in different parts of the US. They re-create some of the greatest music ever written. With well over 400 high profile shows throughout the U.S. since 2004, BOS are becoming known as the top touring Eagles Tribute band in America. The Eagles themselves sold over 120 million albums worldwide, and their music brings instant fond memories to the millions who bought their records and attended their concerts. Get on down to one of their shows, and you’ll likely find yourself thinking the same as thousands before you. “Close your eyes, and you’re there”.

Darrel Monson is our voice crafting expert. He can change his voice about as fast as Don Rickles or Billy Crystal… (Even though he thinks he’s Tommy Smothers.) It doesn’t hurt that his family was touring all across the Midwest doing Gospel concerts all before he was even a teenager. No sir, it didn’t hurt at all. When he first heard The Beatles in 1964, he knew what he wanted to do and as well, the moment he first heard the Eagles, he knew the sound he wanted. That’s all she wrote. That was it for him. The whole enchilada. He has been involved in many musical efforts through the years (no name dropping), but none have been as fun as playing and singing the songs of the Eagles for Eagle fans!

Chris Turbis is our Piano, Guitar, Orchestra and Banjo Player who even plays a little Sax! He is our resident wild man. Classically trained on the piano from very early childhood in the Canadian Conservatory of Music, he has played and toured in various bands including The Regulators, Alligator Stew, Wyldsky, Kelli and The ShadowMen, and his rock and roll life started somewhere on the Sunset Strip back in the early eighties. Currently, he also plays in Mr Crowley-A Tribute To The Music Of Ozzy, and is also playing around the LA area with in various roles as a session and live player. Some of the awards he’s won are Best Keyboard Player 2004 in the AAMA Awards, and AAMA Video of the Year 2004 (Alligator Stew). He has been on bills with such acts as such as Lynyrd Skynyrd, The Allman Brothers, Motley Crue, Blue Oyster Cult, The Guess Who, Great White, Poison, Delbert McClinton, Rare Earth, Ted Nugent, Marshall Tucker Band, Pablo Cruise, George Lopez, and many more…

Jimmy Williamson – In the words of Tom Petty, “The Drummer is The most important member of any group,” and Jimmy Williamson holds true to that thought right down to the bone. He’s as solid as a rock. Jimmy Boy (as he’s fondly been dubbed) studied the drums formally while growing up, and his father was a huge musical inspiration, surrounding him with people like Nat King Cole, Judy Garland, Frank Sinatra and more!! Working with acts like Toto, REO, Stevie Nicks, Robben Ford, Joe Sample and Lee Ritenour, he saw how it was done on the highest of levels, and now he finally gets to put all his knowledge into action on his own behalf, and of course, … all while living the dream.

As a seasoned pro, David A. Williams not only brings years of guitar playing experience to BOS but also years of playing in tribute bands. David A. has been in tributes to Deep Purple (Deep In Purple), Bad Company (Badass Company) and most notably the Rolling Stones (Sticky Fingers/Hollywood Stones). He channels the look, spirit and vibe of the original artists, while breathing some fresh fire into the classic artists he is paying tribute to with the music. David A. is also an excellent driver. He has shared the stage with Eric Burden, Billy Squier, Bernard Fowler and Slash.

Nate King is our overall utility player. He can play the B-Bender guitar (like Bernie Leaden), the slide guitar (like Joe Walsh), the rock leads (like Don Felder), and even the Pedal Steel Guitar. Nate grew up in Detroit listening and playing with a multitude of amazing jazz and R&B artists. After moving to Los Angeles, Nate has toured and played for over 2 decades with a wide spectrum of acts, from Rock to Country, from Pop to Be-Bop, and everything in between.

Mike Bear is a true musician and has dedicated his life to music through playing the bass. Amongst the many genres of music Mike involved himself with through the years,he never got to truly study the bass lines of Randy and Timothy. After combing over the Eagles catalog he became a fanatic for the songs and recordings, and he truly plays the songs as Randy and Timothy did.He even shares his talent on the fretless bass during some of the Henley tunes.Mike found a fascination in the space between Randy Meisner’s notes on those old recordings and he adds a level of support to The Boys of Summer that is felt and heard.

Jerry Schaeffer – Every good band that tours as much as we do needs two bass players to keep this thing rolling. Jerry has paid his dues, and has worked his way up to playing at this level. As Chris Turbis and Jimmy Williamson put it, “Jerry is one of those players that wouldn’t have lasted 10 minutes in LA without gettin’ the call. Fortunately for us, he spent his early playing days in Colorado where he wasn’t as noticed as he would’ve been in a major market.